Michael Chomick was born in Vancouver, British Columbia, Canada, the fifth of 7 children for Andrew and Marisa Chomick. His first introduction to the world of art-making came during visits to the basement of the family’s home. This is where both his parents practiced their hobbies of fine art-making through painting with oil, and/or sculpting in clay.

At the young age of 11 his parents decided to leave Canada and relocated the entire family to the Caribbean island of Barbados. While during the two-year stint on the island Chomick began his artistic career by writing and illustrating his own-brand of Super Hero comic books to share with family and classmates. (The comic book creations were the birth of what has become his style and technique of both painting and drawing. Works that are derived from a mind-set of spontaneity: literally works that are created with no preconceived thought, and are produced as the image is developed.)

Two years later, St. Petersburg, Florida became the artist’s next area of residency. There, after the completion of high school, he entered into the world of commercial art by attending a two year program which introduced him to all aspects of that field.

After 11 years in the aforementioned vocation, September, 1986, he changed artistic direction and veered his creative spirit towards what has become his life’s mission — that of a fine artist. Feeling a loss of artful and spiritual grounding that was encountered while a commercial artist, he quickly found his voice in a world that offered so much more substance and emotional growth.

The past 20+ years Chomick has been experimenting and practicing his talents as a visual artist, delving into a variety of mediums, i.e.: print-making, mixed media clay sculptures, small up to mural-sized neo-expressionistic oil paintings, ink or graphite line drawings, and constructions of various objects and materials.

During his 2 decade tenure this award winning artist has had works exhibited in local, national and international exhibitions of both solo and group settings. 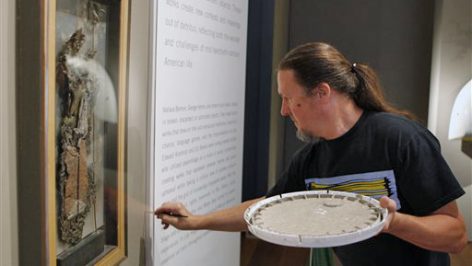 ADVANCE FOR MONDAY SEPT. 26 – In this Thursday, Sept. 22, 2011, Photo, Getty curator Michael Chomick touches up a wall for the upcoming show The Pacific Standard Time at The Getty Center in Los Angeles. Between Oct. 2011 and Feb. 2012, Pacific Standard Time, a major exhibition at the J. Paul Getty Museum will present a survey of postwar painting and sculpture in Los Angeles. (AP Photo/Damian Dovarganes)